ISFL Player of the Year Award 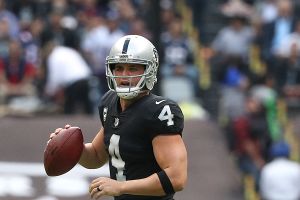 Chris Orosz became the first quarterback to win the NSFL OPOTY Award in 2017 during his tenure with the ISFL.

The National Simulation Football League Player of the Year Award (sometimes referred to as NSFL POTY) is an award given by the NSFL Head Office & GM committee to the players who are considered the most impressive in the National Simulation Football League (NSFL). There are two winners every year, one on the offensive side of the ball and the other on the defensive side. Since the 2016 season, the NSFL has held the annual NSFL Awards Ceremony to recognize the winner of the POTY award and all other awards.

The NSFL HO & GM committee has presented two Player of the Year awards since 2016, as the award is split into an offensive and defensive player of the year. Both are voted upon by 15 dedicated head office members and general managers at the end of the post season, though the results are not announced to the public until the following preseason. There is no consensus on which of the two should be named "Player of the Year" overall, as this is typically covered by the Most Outstanding Player award voting.

Offensive Player of the Year

Defensive Player of the Year