Lane Frost II (born September 2, 2022) is an American football player of the Minnesota Grey Ducks of the Developmental Simulation Football League (or DSFL). He played college football for Notre Dame before transferring to Alabama, winning two National Championships in 2044 and 2045, winning National Championship MVP in the latter year. Forst earned the Heisman Trophy in 2046.

Frost was drafted with the twenty-first pick in the 2047 DSFL Draft by the Minnesota Grey Ducks and went on to catch 74 passes for 995 yards and 2 touchdowns, which was good enough to make a DSFL Pro-Bowl selection. After a stunning rookie year, Frost entered the 2048 ISFL Draft, where he would be selected to the Yellowknife Wraiths with the thirty-first pick. Frost signed a 3-year deal with the Wraiths worth $2M per year and $4M if sent down to the DSFL. Frost has yet to make a ISFL debut. He has also set records in the DSFL when he broke the Minnesota Grey Ducks team record for receiving yards in a single game, with 198 yards in week 1 of the 2048 season.

Lane Frost II, born to Jason and Laurie Frost. Frost is also the older brother of Kellan Frost who is a American football defensive end who was drafted by the Norfolk Seawolves, and his late brother, Ryder Frost, who died in a car crash going home from an airport after a Minnesota Grey Ducks game. His uncles are Dax Frost and Baxter Frost. When Frost was a kid, he wanted to play baseball, but that quickly changed when he tried out for his local football team, to play with his brother. Frost also has an older brother named Cillian, who played Ice Hockey and has a child named Jamall. Frost was a star from the start. He was fast, agile, and quick on his first step. Frost looked up to running backs like: Emmitt Smith and Jamal Lewis. Frost dropped baseball at the age of 12 in pursuit of football. Frost made his middle school team very easily and had over 1500 yards in only 9 games (he had an ankle injury for the final game). Frost made his high school varsity team as a Freshman and continued to dominate winning state with Peoria High School his first year. Frost had 1500+ yards every year of his high school career, and went to state all 4 years, winning 3 out of the 4. Frost would have more than 20 offers from D1 programs. He chose to stay close to home and go to Notre Dame.

Frost committed to Notre Dame his junior year of high school on a full ride scholarship. Frost had a miserable freshman year. He only played 3 games with 122 yards rushing and ending his year early was a torn ACL. Frost had surgery to repair his torn ACL and was granted a medical redshirt for his playing career. He would be able to return to training camp for the 2042 season.

Frost entered his redshirt freshman year being the backup running back behind Mason Moore. Frost and the Irish ended the season with a record of 10-2 which wasn't good enough to make the top 4. Their final placement in the rankings was 7. Frost had a good year, in which he went for 432 yards on 54 carries, and 7 catches for 51 yards. This ended his Notre Dame career after he decided to enter the transfer portal.

Frost decided to use his final redshirt after he played 3 games for Alabama that season, racking up 341 yards on 46 attempts and 2 touchdowns. Frost was asked about why he redshirted, he stated: "I'm not ready. I have to be ready to play on a bigger stage, and I'm not there mentally yet. Playing at Notre Dame is different than playing here. I understand some of you are disappointed, but I have to do what is right for me and the team at the end of the day. I will still be on the sidelines cheering these guys on, and that is all I can do for the time being."

Frost ended up the backup to Temple Poyer who went to the draft following this year. Frost ended the year with 91 carries for 723 yards, and 5 touchdowns. Frost and the Tide went on to win a Natty against Houston. Frost rushed for only 52 yards in the game, but it was enough to get a starting job for next season.

Frost was great in his first year as a full time starter. He rushed for 1032 yards, on 211 carries, and 12 touchdowns. Frost and Bama went to the National Championship for the second year in a row, going on and beating TCU for a second straight Natty. Frost won MVP for the game after rushing for 103 yards and 2 touchdowns.

Frost continued to improve going into a run heavy offense going into the 2046 season. Frost ended his season running for 1412 yards on 253 carries and 15 touchdowns. Bama ended up going into the College Football Playoffs with the 4 seed. They lost to number 1 ranked Clemson and ended their 3-peat chances. Frost would enter the DSFL draft before the college football playoffs started.

Going into the DSFL Draft, Frost was 6'1" and 210 pounds. He had a unofficial 4.32 40-yard dash. During positional drill during a private GM workout, Frost showed good hands, and decent route running. He also caught 19 out of 20 of his passes thrown to him, with the one he missed being overthrown. 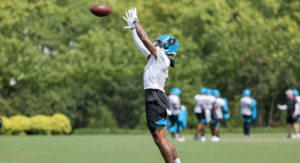 Frost was drafted by the Yellowknife Wraiths in the 3rd round with the 31st pick. He signed a 3-year contract, $2M each year, with an MO in the third year. Frost went to his first ISFL training camp with the Wraiths and was later sent down to the Minnesota Grey Ducks. Frost later stated: "I am just rolling with what the league gives me at the moment. But I think it is a great learning experience to be called down for maybe 1 to 3 seasons. I mean I would like to be called up, but that's not always the case. Again I love the guys here and I will be happy when I get to hit the field with them." Frost later would visit the facilities for the first time, where he bought a house worth $4M. He stated: "I think my future is here and in Yellowknife. It's a great place, just really cold. When I signed that contract, I was the one that put the no-trade-clause in there and I intend to keep it there." Frost and his girlfriend intend to move into the home during off-seasons. Frost has also been spotted at some of Yellowknife's games, like their week 1 win and their week 3 loss. Also spending his first contract on a local charity call The Yellowknife Funds For Orphan Kids, a organizations giving homes to the kids in the Yellowknife community. 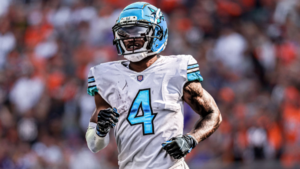 Frost after scoring his first career touchdown vs the London Royals.

Frost was drafted by the Minnesota Grey Ducks, in the 3rd round, with the 21st pick. Frost signed a 1-year, $6M contract. In his rookie debut Frost caught 7 passes for 70 yards on 16 targets in a 28-10 loss to the Portland Pythons. It only took him 3 games before Frost got his first 100-yard game, when he caught 6 of his 8 targets for 107 yards, for Minnesota's first win of the season 30-26 against the Kansas City Coyotes. It would take him 9 weeks before he caught his first touchdowns, scoring 1 in week 9 & 10. Frost caught 8 out of his 11 targets for 144 yards and 2 touchdowns in the 2-game span, with back-to-back wins. After going 7-7 and finishing 2nd in the DSFL North, Minnesota went on to play the 11-3 Portland Pythons, in which Frost caught all 8 of his targets for 119 yards and adding a touchdown on top of that. Minnesota lost the game 38-26, ending their season. Frost ended the season with a total of 74 catches on 121 targets for 995 yards and only 2 touchdowns. In the off-season he would be selected to the DSFL Pro-Bowl by the DSFL GMs. Frost was also nominated for the Most Outstanding Player Award, and finished in second place.

(all salaries become $4M if sent down to the DSFL)